Ben Martin is a former Australian Young Farmer of the Year – but he’s not resting on his laurels. The North Queensland mango grower has imported French robots to improve the consistency of his product, and that’s just the start. 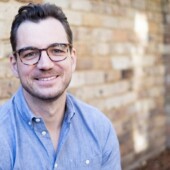 Creativity runs thick in Ben Martin’s blood. When the Bowen mango farmer received an offer to buy the neighbour’s place in 2011, his father was on board, but his mother said no:

“So we bought the farm and called it “Mum’s Block,” laughs Ben.

This and other big bets have paid off for the 2019 Young Farmer of the Year – but the path to success has not been easy. With a steadying breath, Ben talks about the beginning, as a young boy, he, his father and mother were told by many people that growing mangoes like this ‘would not work’.

“Mum and Dad purchased the first farm in 1990 as a bare block of dirt. We planted mangoes at high density, which was unheard of then,” said Ben.

“This is where the innovation and the use of agritech started.”

The farm thrived under this pioneering plan, and production soared. And that’s not just a matter of opinion.

High-density mango plantings produce up to 66 tonnes a hectare per season – 3.5 times more than low-density orchards. But as Ben points out there are still a number of challenges to overcome to achieve this consistently each year.

That was the finding of the CRC of Northern Australia’s Transforming Mango Futures project, released at the Northern Australia Food Futures conference in Darwin in May 2021 – several decades after Ben and his family started.

Ben’s Plan — a reinvention of the family mango business

Marto’s Mangoes is based in Bowen North Queensland – but Ben wasn’t always destined to be a grower and business owner. He began his working life as an apprentice electrician then down a dark hole, between 200 – 600 metres below the ground.

“I worked in an underground coal mine as an electrician, which is how I got the deposit for my first farm in 2007,” said Ben.

The former electrician has since bought multiple properties to expand the family-owned business with his wife, Ash-Lei.

“Mum and Dad are still actively involved in the business. We are a real team which I think is one of the reasons that we have been able to achieve so much.” Ben and Ash-Lei have redesigned the production system to incorporate cutting-edge technology from planting to packaging – and soon, across the entire supply chain. This involved reviewing the varieties and focusing on one variety.

R2E2 is a mid-season mango with large, highly-coloured fruit. It was selected in 1982 by Ian Bally, Ross Wright and Peter Beal as a seedling progeny of the Florida Kent. It takes its name from the row and field position of the original tree at the Queensland Department of Agriculture and Fisheries’ Bowen Research Facility — a stone’s throw from Ben and Ash-Lei’s farms.

Expanding the business and growing his impact

High-tech sensors and robotic fruit bin tippers are the latest innovations at Marto’s – Ben’s voice lifts when he talks about the businesses latest acquisition a French machine from MAF Roda Agrobotic.

“It grades the fruit on internal and external defects, size, weight, colour – and dry matter content. It’s the only one of its kind in Australia.”

RELATED: The digital transformation of our food system

The dry matter reading was not initially available. Ben waited 12 months, and when the technology advanced, he worked with MAF Roda to develop the product. There’s a minimum industry standard to ensure the eating quality of the fruit, which is typically satisfied by spot checks in the orchard. This innovation automates the process.

Ben is also developing an app for all stages of the supply chain — from the orchard to retailers. It will deliver provenance and traceability in the palm of your hand and much more.

“It manages everything in our business from the cost of production to quality assurance to purchase order management, invoicing, stock management – whatever you can imagine it does.”

The locally-developed application also incorporates all workplace health and safety requirements. The work started six years ago and is at the point of commercialisation – producing another potential revenue stream for this innovative producer. Ben’s ability to keep his head in the moment and his mind on the future is unique – and like all farmers, he’s eager for a bit of rest.

“Mate, whether I should go fishing or not, tomorrow is on my mind at the moment,” he said, only half-joking.

“I’ve got too much work to do, but the weather is absolutely beautiful up here.”

And while the MAF Roda robotic bin tipper is Marto’s Mangoes first foray into robotics, this is just the beginning.

“We’ve seen good advancements in the last five years with packhouse automation and technology – the next big step forward is going to be in the orchards,” he said.

“That’s autonomous vehicles that will do spraying and slashing and more. That’s where I’d like to see progress in the next five to 10 years.

“There’s already companies doing that, but trying to get that in mango orchards, proof-tested and fully developed is the next big thing. So, if you look at the advancements in the last five years, the next ten are going to be really exciting.”

Ben is also looking at how they can extend their harvest window and has his eye on anything that will help his business.

“For me, if I ever thought I was in a good spot and I couldn’t do any better then I would sell the farm. There’s always something you can improve on and do better,” he said.

Ben has sound advice for people considering using technology to power productivity or solve key issues on their farm.

“Dream big and data is king,” he said. “We don’t make a decision on our farm unless we have data behind it, and that’s key.”

He also said building an informed, and supportive network is critical to staying up-to-date on the latest innovations in agriculture.

“You need to surround yourself with like-minded people, and positive people,” he said.

“If you’ve got a good network, you’ll always stay on the cusp of things.”

Enjoyed this story? Want to learn more about the Asia Pacific region’s innovative agrifood tech ecosystem and to surround yourself with like-minded and positive growers like Ben and Ash-Lei? Join us at evokeAG. on 21-22 February 2023 in Adelaide, South Australia to hear from growers like Ben, and agritech developers with solutions for on farm challenges.

Tickets for evokeAG. 2023 Down to Earth are now on sale here.