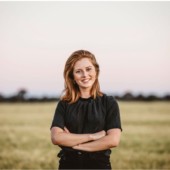 Phillipa Lawson never intended to follow in her family’s fourth-generation farming footsteps. But when her 72-year-old father invited the young family to give it a go, they grabbed the opportunity with both hands. She and husband Skeet returned to the farm six years ago, and have never looked back.

Today, Phillipa’s environmental science degree once used to teach high school has been put to good use at the 1600-hectare wheat, barley and lentil operation at Pinnaroo, in South Australia’s Mallee region, near the Victoria border. While Skeet’s extensive operational skills from his days as an airforce mechanic for the Royal Australian Air Force (RAAF) have been integral to the development of the farm.

Together they work the land using a multi-pronged approach to weed management, helping to reduce chemical use while boosting production soil health. Some of their tactics include chaff lining, controlled trafficking, increasing their lentil crop to a third of the property, burning rows rather than whole paddocks, introducing hay production and targeting soil improvement in specific areas.

While the move hasn’t been without its challenges, including many frosts, one plague and two droughts within the first six years, it was the introduction of steep overseas lentil tariffs, having their lentils rejected at the silos based on visual appearance and their daughter’s fussy eating habits, that steered Phillipa towards the family’s next venture.

“About three years ago, when the Indian Government slapped steep tariffs on lentils, we were infuriated that an overseas political decision could so drastically change the value of our crop, when nothing in our paddock or our production system had changed,” said Phillipa.

“The following two seasons were tough,” she added. “Our lentils experienced weather damage due to lack of rainfall and frost. When we delivered our produce to the silo, they were rejected purely based on their cosmetic appearance. These premium lentils that were slightly cracked or chipped became tricky to sell.’’

“Around the same time, our nutritionist suggested more protein in our daughter Annabelle’s diet could help to improve her fussy eating habits and sleeping difficulties. So we tried adding lentils directly to her dishes, but she just kept picking it out.”

RELATED: The rise of personalised nutrition

That’s when Skeet and Phillipa decided to grind the lentils, make a flour and hide the protein-packed pulse in pancakes and biscuits, sauces and curries. The tactic worked, an idea was sparked, and Phillipa began researching the local lentil market. She quickly realised the vast majority of lentils sold on local supermarket shelves were imported, while the top quality Australian grown crops were exported overseas.

“It didn’t make sense to me, so I seized the opportunity to diversify channels onshore,” said Phillipa.

“I took part in an intense startup accelerator program called Farmers2Founders in early 2020, launched The Pinnaroo Farmer brand mid-pandemic in July, and now sell our red lentil flour directly to customers through our online shop, at the local Pinnaroo bakery and through wholefoods store in Adelaide.”

The time from concept to delivery was just six months, and within the first three months of trading, The Pinnaroo Farmer had sold 250kg of flour.

Mastering the system to meet customers’ needs pays off

While the Lawsons originally thought separating their grain and lentil operations to ensure their gluten-free claim would be a costly exercise, it turned out to be both affordable and achievable.

“We devised a system on the operational side to decontaminate our headers, augers, trucks and silos,” Phillipa explained. “Once harvested, the lentils are put in 1-tonne bulk bags, sent to a nearby gluten-free seed cleaning company before being returned to us on the farm. From there we use a small domestic mill to process 80kg batches.” Phillipa is given extra peace of mind by sending flour samples to an Adelaide lab to test for traces of gluten.

“We didn’t initially think we could be gluten-free as we grew wheat and barley. But through my customer research, nearly every second person was asking if this product was going to be gluten-free, so we made that happen.”

While it’s still early days, Phillipa and Skeet aren’t the type of people to sit idle, so plans are afoot to scale up and develop more products.

“One of our big visions is to use lentils from throughout the district, connecting customers back to the farmers.”

“There’s a huge amount of quality bi-product in this industry,” she added.

“If the lentils are chipped or dented coming through the header and aren’t deemed pretty enough for the packet, they don’t make export grade. That’s where we hope to step in and find a profitable use for these nutritional lentils, while also giving farmers greater autonomy about how their lentils are sold.”