Experimenting with whiskey waste pays off in the paddock - evokeAG. 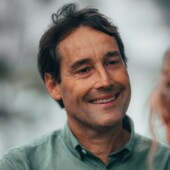 Twelve years ago, Stuart Were moved to Kangaroo Island with his wife and two children. He’d been travelling a bit and managing properties in Australia’s pastoral industry. They loved the place and put down roots, buying a run-down 145-hectare property. Stuart returned to a role as a stock agent with Elders, joining an active team that includes people specialising in livestock, wool, real estate and insurance. “We’ve got the full gamut of staff over here so we can represent and help out our clients with all their needs,” said Stuart.

Stuart was encouraged to try his hand at auctioneering – something he was pretty nervous about at first – but found he loved it, and now is an auctioneer for both livestock and real estate. “There is plenty of training available and there is a big need for auctioneers,” he said.

On the weekends, Stuart began developing his cattle property nestled in the Macgillivray region, 30 minutes from Kingscote – the island’s largest centre – where Stuart commutes to the Elders office. The property’s predominantly open landscape boasts a treelined creek with sugar gums and pink gums, where Stuart now runs 60 breeders. He started with an Angus base, crossbred with Black Simmentals and then began crossing over to Speckle Park, “partly for a bit of fun, partly a bit of interest,” he explained.

RELATED: The end of one-size fits all food

“They’re going really well. They are a wonderful breed. Beautiful quiet cattle with a terrific structure and a good yield straight off the grass, which seems to be where the market trend is going now.”

Experimenting with whiskey grain waste pays off in the paddock

Then he met Charlie Schmidt, the new master distiller at Kangaroo Island Spirits. Started in 2006, it is the oldest gin distillery in Australia, and uses some unique botanicals from the island, including boobialla (known as native juniper) and a coastal daisy bush. As well as doubling production to 1,000 – 2,000 litres a week and moving into whiskey distilling, Charlie has focused on making the operation more sustainable – reducing power and water consumption and finding better ways to deal with waste products.

RELATED: Unlocking the potential of autonomous agriculture at AgriFutures evokeAG. 2023

“In making whiskey you go through a lot of grain,” said Charlie. “When we use the grain [sourced locally] to make the whiskey we remove all the starch and convert that to sugar. What’s left over is crushed grain. It’s mostly husk, protein and fibre. In Scotland, there’s a history of giving that to farmers for cattle feed.”

So, Charlie asked Stuart if he knew anyone who might want to take the couple of tonnes of waste malted barley each week, and Stuart decided he would try it on a mob of his own weaners “as an experiment”. And after about three days they couldn’t get enough of it.

“They love it,” said Charlie. “It’s funny watching them run across the paddock to come and get it off the tractor.” The arrangement seems to be a win-win for everyone. “It’s like the perfect symbiotic relationship,” said Charlie. “If Stuart didn’t come and grab it off us, we’d have to take it to the dump or put it in green waste or find a place to compost it. It becomes expensive and costs us to get rid of it. If it’s free for him and free for me, we help each other out.”

“I’m looking at it as a potential hay replacement,” said Stuart. “We feel that it’s actually doing them a lot of good, particularly over the winter months when we’ve had the green feed. I can see the cattle improving on it all the time. When I wean my next lot of calves, I’ll put them onto this as well, because it’s great for handling, because you’re going out there every two or three days with the brewer’s grain. It brings them in, and they get used to people and vehicles and it quietens them down.”

On top of these benefits, there is increasing evidence that the inclusion of lipid-rich feed supplements, such as brewer’s grain (a by-product of the beer and ethanol manufacturing process), can reduce livestock methane emissions by 15-20%.

CSIRO’s research on strategies to de-carbonise the dairy industry, along with the University of Melbourne and Meat & Livestock Australia’s research, as part of the ‘Reducing Emissions from Livestock Research Program’, further demonstrate the potential of brewer’s grain.

When a high fat feed supplement is added to a rumen’s diet, including algaes, seaweeds, grains, fats and oils, the methane emissions are reduced by 3.5% for every 1% increase in the total fat concentration in the diet. Brewer’s grain contains on average 5-8% crude fat, proving a top contender in reducing methane production, along with various co-benefits such as increased energy and protein.

Stuart hopes to quantify the benefits of brewer’s grain in future research, and has plans to also include asparagopsis seaweed into the cattle’s diet, to further reduce emissions, “once the product is commercially available”.

“Over the next 5–10 years Kangaroo Island Spirits has plans to keep expanding, and sustainability will be a key part of that expansion,” explained Charlie. One of the first projects in reducing their environmental footprint and power consumption will be installing solar panels on the sheds. Stuart has put Charlie in touch with Thomas Elder Consulting, to look into the carbon accounting side of his business. It’s one of the many ways an Elders agent on an island helps out, as they need to in small communities.

In the Black Summer fires of 2019–20, ferocious fires burnt almost half of Kangaroo Island, leading to the destruction of 113,000 hectares of land used for primary production.

Stuart and the Elders team spent a month fighting the fires and providing immediate help, then many months getting in fodder, finding agistment for livestock and sourcing scarce fencing materials. “Business is put to the side in those sorts of times,” Stuart said. “They’re your friends and your clients, and you’re there to help, because that’s what community does.”

RELATED: What makes South Australia the state of innovation? Once again, the company has stepped up to be the Platinum Partner for the 2023 evokeAG. event in Adelaide on 21–22 February, continuing a partnership since the inaugural evokeAG. in 2019.

Elders Managing Director and CEO Mark Allison said, “We’re proud to once again be partnering with AgriFutures evokeAG. to deliver an international event to a domestic and international audience to catalyse the next generation of innovations that will continue to spur Australian agriculture into the future.”

Learn more about the livestock methane-mitigation potential of feed supplements, such as brewer’s grain, via these studies: