Powering fast and reliable long-range connectivity is the end goal for Zetifi, that’s seen the Australian company gain world-wide recognition and successfully launch in the US market. 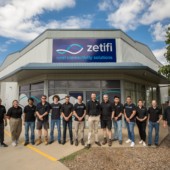 From humble beginnings in the backroom of a local computer store in Wagga Wagga, NSW in 2018, rural connectivity company Zetifi is set to go global with an office in Rochester, New York.

The exciting milestone has been fast-tracked by the US$500,000 prestigious prize Zetifi claimed in the 2020 Grow-NY business competition and through connections from evokeAG. 2019, that’s been the springboard for much of the company’s growth and development over the last two years.

Zetifi CEO and Founder Dan Winson explained, “evokeAG. was the event where I really got to present and test my ideas to a large audience and it introduced me to many of the partner companies that have supported us as we’ve refined our products, including AuctionsPlus and CaseIH.”

“The confidence I took from my evokeAG. experience and the projects that resulted from the event were critical in refining the offering we presented for the Grow-NY business competition – evokeAG. really accelerated our trajectory.”

To add to this exciting growth period, Zetifi has recently been selected as one of the five investment-ready startups to pitch at the invite-only 2022 evokeAG. Investor Dinner, offering fruitful opportunities to connect with domestic and international investors.

Chief Technology Officer, Ben Letchford, relocated from Wagga Wagga to Rochester, New York in early December 2021 to become Zetifi’s first US employee and establish the new office. As he explained, the state of New York didn’t always seem like the ideal place for a company that provides Wi-Fi for farmers.

“When the idea of relocating to New York was suggested, ‘I said yes’ without hesitation but it also conjured visions of bright lights and skyscrapers so it was hard to believe there was a big enough need for our products,” said Ben.

“I’ve since learnt that in the farming areas of Upstate New York, poor mobile phone service is a big issue.” Proximity to these areas around Rochester where connectivity solutions are needed is a key reason why the city has been chosen for the company’s US base, but Ben won’t be getting his boots dirty too soon.

“My role is mainly behind a computer screen overseeing the development of the systems and software we use to deploy fairly sophisticated Wi-Fi networks in areas where most people can’t, unless you have a network engineer handy,” explained Ben.

“Rochester and the surrounding area have a much bigger population than Wagga and we’ve heard great things about the talent pool of software and network engineers, so once I’m settled, we’ll be recruiting new staff to build a US development team.”

Zetifi CEO and Founder Dan Winson is thrilled that they’re finally able to fulfil the company’s plans for a US office and launch after a year of delays due to COVID-19 travel restrictions.

“This step has been in the works ever since we were fortunate enough to be awarded the prize by the Grow-NY competition committee,” said Dan.

“Our contacts at Grow-NY have been very understanding but the delays have certainly been a source of frustration as Rochester provides such a great platform for US direct sales and trials that we’re keen to get up and running with farmers in the region.”

Ben’s move to New York isn’t the only staff movement that is a source of pride for the business which has grown from 9 to 15 full-time staff over the last 12 months.

“As much as we’re excited about Ben moving to New York, we’re just as pleased to be creating new jobs in Wagga Wagga and giving people a reason to relocate to the region,” said Dan.

“Over the last year, we’ve had five team members relocate from either Sydney or Melbourne to join our team in software, networking and marketing roles.

“They’re absolutely loving the change in lifestyle and we’re incredibly grateful to have their skills in the business.”