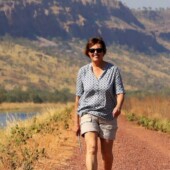 Australia’s trade in fresh fruit and vegetables to Indonesia is growing fast, with our nearest neighbour seen as a key future destination for high-value horticultural produce from Australia as its population booms, middle class grows, average income soars and diet changes.

In the past three years, and despite the global COVID-19 pandemic, Australia’s fruit, vegetable and nut exports to Indonesia have become increasingly important, valued at $103 million in 2021.

Analysis by the Australian Bureau of Agricultural and Resource Economics and Sciences (ABARES) predicts future Indonesian food demand to quadruple by 2050, driven by increased consumption of higher-value food products such as fruit, vegetables, dairy, sugar and red meat by its young, urbanised and e-commerce-savvy population.

“Currently Australian horticultural exports only have a 3% market share in Indonesia,” said Brei.

“But it’s a growing opportunity for Australia as Indonesia’s 280 million people, are looking to eat quality, fresh and healthy foods, shop more in supermarkets, and are happy to order and buy online.”

As demand for traditional starchy root crops falls, ABARES forecasts a 269% jump in the consumption of fresh fruit in Indonesia, most supplied internationally.

Total fruit imports to Indonesia, the world’s fourth largest economy are expected to reach $25 billion by 2050, and total vegetable imports to be valued at $11 billion.

Brei explained Australia’s global reputation for providing high quality fresh food, the 2020 signing of the Indonesia-Australia Comprehensive Economic Partnership Agreement which liberalised trade and dropped many tariffs and duties, and an increased ability by more Indonesians to pay premium prices for Australian produce, have made Indonesia a key market focus for Australian horticultural exporters.

Leading the way has been the Australian table grape industry, which in the past two years since the signing of the Indonesia-Australian trade deal have seen import quotas relaxed and sales double as a consequence.

In the January to June 2022 season, 20,300 tonnes of table grapes – mainly the big Red Globe seeded variety – valued at $80 million were exported from Australia’s premium Sunraysia district to Indonesia, compared to less than 11,000 tonnes the previous year.

“It’s a really important market for us; second only to China,” said Jeff Scott, CEO of the Australian Table Grape Association. “Just two years ago 15% of our table grape exports went to Indonesia but that is now above 20% and growing.

“The upper middle class really like fresh fruit to eat at home as a delicacy and there is no local grape industry; Australia is now the main supplier into Indonesia, they are trying newer varieties of grapes as well as the traditional Red Globe and they are prepared to pay a fair price for good quality fruit.” Jeff said it’s vital Australian fruit producers and exporters wanting to expand into Indonesia find local importers and distributors to partner with, understand the lack of cool storage in many parts of Indonesia, and work through any quarantine and import restrictions.

For example, most fresh table grapes are shipped in refrigerated containers to Indonesia from the Port of Melbourne – a small portion are air-freighted – with Indonesia’s preparedness to accept X-ray irradiation to kill fruit flies or other potential pests a key benefit for Australian exporters.

Most Australian grapes are sold via supermarket chains around the more affluent cities and suburbs in Indonesia, with some also available in the more traditional markets.

“We’ve had a deliberate policy to target Indonesia, learn how to do it from a small start, and then steadily build up over the past few years; the free trade agreements and regular trade discussions between our Prime Ministers have really helped too,” said Jeff.

He saw – and seized – an opportunity to export his late-picked cherries in two kilogram and five-kilogram premium presentation gift boxes to Indonesia in late January and early February in time for Chinese New Year, in a month when Australian export demand for premium Christmas cherries had waned.

Reid Fruits Marketing Manager, Tony Coad said Indonesia has been a highly successful new market. “Success is about making the right contacts in-market, and being proactive,” he advised.

The high uptake of technology and smartphones among young Indonesians, has proven a key marketing tool for Australian fruit and nut exporters harnessing the influence of local celebrities to target young consumers, via social media campaigns. One such successful campaign featuring a popular Indonesian influencer to promote the health benefits of celery, via their video blog (vlog) saw celery – a non-traditional food – leap 500% growth in sales.

Australia’s biggest almond company, Select Harvests, is also focussing more on the Indonesian market than it has in the past, despite selling only 1,000 tonnes of almond kernel into Indonesia, less than 5% of its annual global exports.

Select Harvests’ International Sales Manager, Ekrem Omer said that since the shipping freight problems of the post-COVID era have made exports to Europe more difficult, Indonesia is a growing and changing market where he believes Australian almonds can command a much greater market share.

E-commerce sales and social media campaigns are planned to help its expansion into the Indonesian market.

“We are now looking more closely at easy access and emerging markets like Indonesia that are easy and cost-efficient for shipping because they are so geographically close, where customers are now turning to almonds as they eat more health foods, and where younger people are eating more snack foods and high protein health products,” said Ekrem.

“It’s the younger generation we see coming up with new ideas for value-adding our almonds too; some have started to manufacture almond milk from our almonds, while others are repacking our almonds into snack foods, health bars or using them in baking.” Ekrem said it is a big opportunity for Select Harvests and Australia, since California now supplies 80% of Indonesia’s almonds, yet on proximity and freshness of nut supply, he believes Australian almonds can quickly gain the upper hand.

“It’s really important to understand how your product is distributed and purchased in the market, and understand your customer’s storage conditions and temperature, especially if you are selling a premium food product, even after it has been repackaged,” said Ekrem. “You don’t want people turning their back to your brand or product, because it’s been stored or transported in poor conditions.

“And it’s important to partner with the right people; a few big distributors dominate Indonesia, and you can’t deal with them all or you end up competing with your own products; research, pick your distributor and understand them and their capabilities.”

Horticulture Innovation’s Brei Montgomery added that it is vital Australian producers and exporters also understand how quickly Indonesia is emerging as a highly developed and sophisticated nation, with its import laws and food requirements changing too.

For example, Brei said Indonesia has halal laws that are starting to affect not just meat exporters, but fruit and vegetable exports too, as Indonesia seeks to verify that all imported food consumed adheres to halal religious principles and practices.

“It’s a watching brief, but Australian horticultural producers may soon need to show their fruit and vegetables products are halal too, which could influence the type of lubricants and fertilisers used on farm depending on their ingredients and derivatives; it could be an issue in the future,” said Brei.

Interested in exporting to food and beverages or agribusiness to Indonesia? Go to Austrade export services to learn the basics, find the right markets and understand market requirements.

Enjoyed this story? Want to learn more about the Asia Pacific region’s innovative agrifood tech ecosystem? Join us at evokeAG. on 21-22 February 2023 in Adelaide, South Australia. Tickets are on sale here.