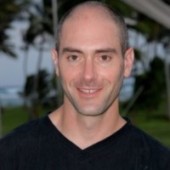 Around 40% of the Earth’s surface and up to 70% of its freshwater reserves are committed to agriculture. With the global population expected to reach 10 billion people in 2050 and urban sprawl appropriating large swathes of farmland, how do we maximise dwindling resources to ensure that food production keeps up with demand?

Farming since 2004, AeroFarms grows with 95% less water than traditional field farms and achieves annual yields many hundreds of times higher per square metre. Located 20 minutes outside of New York City, AeroFarms owns and operates the world’s largest vertical farm – its ninth farm overall – and is working on projects across four other continents.

AeroFarms strives to build farms around the world and to revolutionise the future of farming. Prior to co-founding AeroFarms, David founded a successful nanotech company. David holds a BA from UNC and an MBA from Columbia University. In 2018, David was honoured to be named Ernst & Young’s Entrepreneur of the Year (F&B, NJ).

Through his work with WEFs Circular Economy taskforce and the B20’s Sustainable Food Systems taskforce, David leverages his business acumen to be a force for change and environmental stewardship all over the world.

Thinking up solutions with David Rosenberg